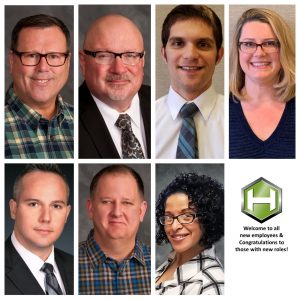 Horst Construction has added several key new employees to our team over the past few months – 11 new employees to be exact! This dedication to growing our team has been spearheaded by the addition of David Thornton, the new Human Resources Partner at Horst.

David was previously employed at Wohlsen Construction as the Training & Facilities Manager for 12 years. David spent 21 years in the Navy, working as a Naval Flight Officer. Since coming on board in October, Dave has been working to streamline Horst’s hiring process and has facilitated the addition of several new team members.

Gregory Robbins joined Horst in the role of Associate Estimator. Greg spent 4 years in the U.S. Marine Corps, working as a radio operator/joint fires observer and then as an asphalt laboratory research assistant. Greg recently graduated from Temple University with a degree in Construction Management Technology.

Horst also recently hired Renee Yeich, who is the new Project Assistant. Renee comes to us from ENM Law where she worked as a legal assistant/bookkeeper.

Josh Kaska joins Horst in the Special Services Division as a Project Manager. Josh received his bachelor’s degree in Urban Development from University of Pittsburgh and his master’s degree in Business Administration from Point Park University. Josh most recently worked as an independent General Contractor/Construction Manager working with primarily residential clients for apartment complexes, condominiums, and large estates.

Christine Hess moved from Project Assistant into the Accounting Department as our new Project Accountant. Christine has worked at Horst for 6 years.

Welcome to all of our new employees and congratulations to those who have recently taken on new roles!